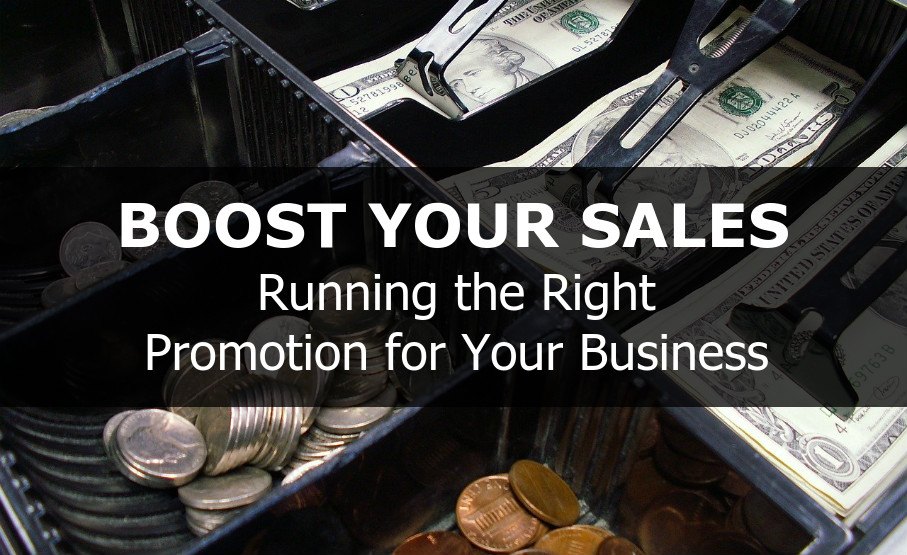 A solid business promotion can bring in much needed sales during slower periods and help your business expand its reach. Sometimes, however, coming up with a new promotional idea can be tougher than we expect.

So, how exactly do you come up with the right promotion to suit your business’s needs and overall objectives? There is plenty to take into consideration, and in today’s blog I will cover the following:

• How to decide on the right promotion idea

• A real-world example of a fantastic promotion

What’s the Right Promotion Idea for Your Business?

As with every other aspect of a business, there is no one-size-fits-all promotion idea that will work across the board. That’s why, prior to kick-starting any promotion, you need to take a number of factors into consideration.

• What your business does

• Who is your target audience – do you primarily provide services to younger people or older people, are you focused on families, what kind of income does your target demographic make, etc.?

• Where are you located?

• Do you operate in a smaller community or a city?

• Do you experience seasonal slumps due the nature of your business (for example, if you install pools, you may face less demand in the winter as opposed to spring and/or summer)?

• What is the general financial status of their area in which you operate? Lower income, middle-class, affluent, etc.

Though some of these factors may seem inconsequential, each one can play a role in the success or failure of any given promotion.

For example, did you know that younger generations (such as Millennials and Generation Z) tend to prefer experiences rather than items? In other words, a notable number of Millennials would prefer to receive a vacation, which offers an experience, rather than an iPad Pro, which is simply seen as an item with limited experiential value.

By the same token, take your location into account. As a point of consideration, if your business is run in a land-locked state where the temperatures plummet in winter, chances are a travel certificate for a cruise or beachside resort stay will prove quite appealing to customers.

Such getaway offers may not be as appealing if your business operates in a coastal town or city where temperatures are warm and pleasant essentially year-round.

Now, along with the above factors, you also have to decide on the what and how of the promotion. So, first off, what will the promotion reward be? Will it be a gift certificate, a set product, a travel-based reward, tickets to an event, etc.?

On the how front, you’ll want to decide on how your promotion will work. Will it be a contest (spin to win, online photo contest, etc.)? Will it be based on buying X item to receive Y reward? Will it be integrated with a family-focused event?

Deciding on the what and how of any promotion is dependent on the questions you answered before. Because family-focused events can really shine in smaller communities, whereas an online contest or a “visit our store to enter” contest where individuals can quickly and easily enter might prove more effective in larger cities where go-go-go is the name of the game.

In addition to all of this, you’ll want to decide on how long the promotion runs for. If a promotion’s run is too short, then people may not even have the time to really get involved. If it runs too long, then people will feel a lessened sense of urgency as they can just check it out later.

Every marketing strategy is going to be a balancing act, but it comes down to figuring out the balance that is best for you.

For example, if you do decide to run a shorter promotion (say a weekend event or even a one-day event), then you’ll want to ensure you’ve done enough on your end so that people are entirely aware of the event – and how long it runs for – before you’ve even kick-started the promotion itself.

Longer promotions may not require as much of an immediate marketing push, but you’ll want to have a strategy in place in terms of how you keep the promotion front-of-mind throughout its run without becoming overbearing.

An example of a great promotion I’d like to share with you comes courtesy of one of our fantastic clients, Hixson Ford of Leesville. Located in a western pocket of Louisiana, Leesville is a smaller city with a modest population estimated to sit somewhere between 5,500 and 6,000 people.

Neighboring areas, such as the army installation of Fort Polk, mean that thousands more potential customers live and/or work within a relatively close proximity of the city itself.

Still, with a lower population than other cities, Hixson Ford knew they needed to run a promotion that would catch the eyes of locals and surrounding residents. And as often tends to be the case in smaller cities and towns, Hixson knew residents didn’t travel as much – particularly when it came to international travel. 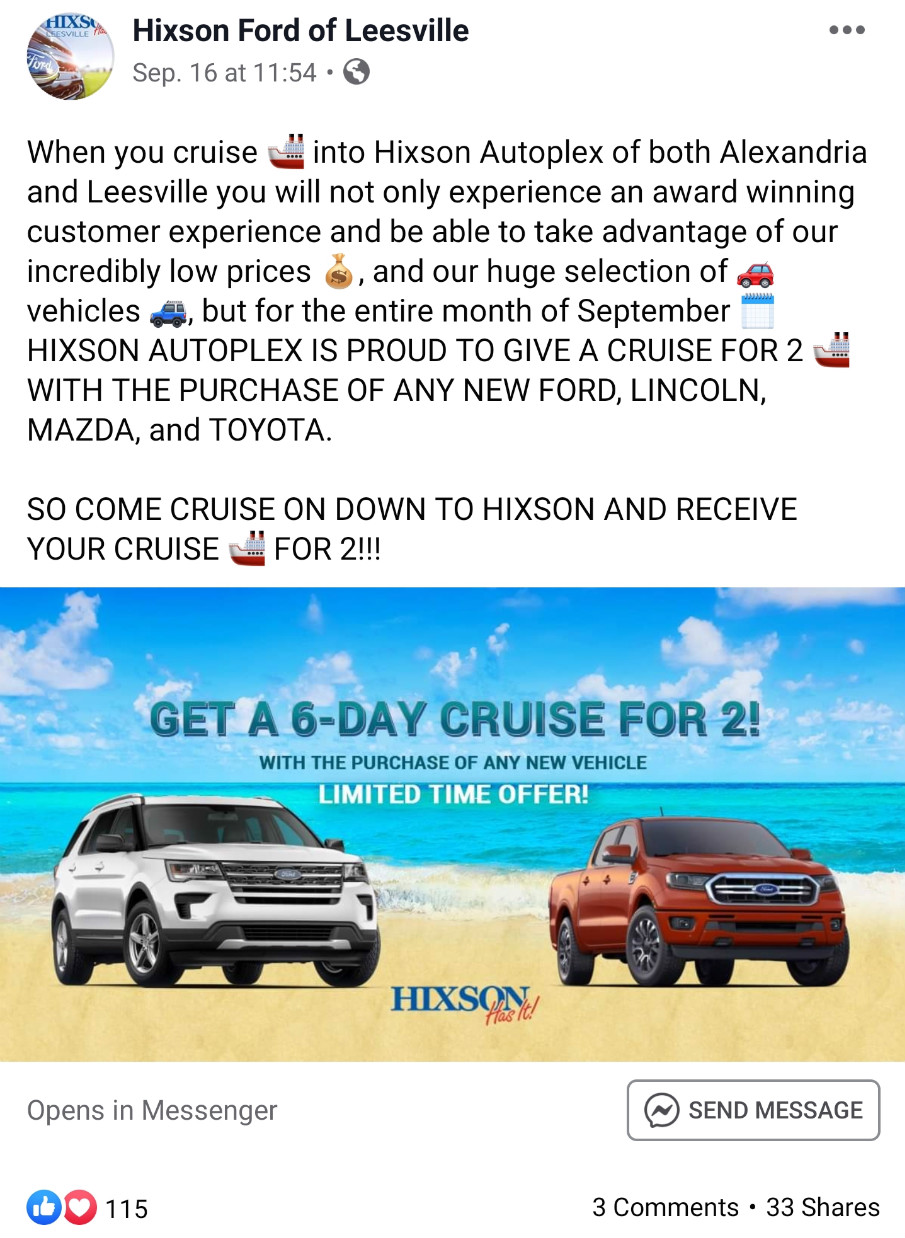 As a result of these factors, the kind of incentive that would really resonate with their prospective customers would be one that offered a unique travel experience without requiring customers to jump through too many hoops to arrange.

Hixson landed on a 5-night/6-day cruise package where all departures happened from New Orleans, located an approximate 4- to 5-hour drive southeast of Leesville. This meant recipients could drive to New Orleans instead of having to take connecting flights to board a cruise from ports in Texas or Florida.

Hixson Ford made all the right choices when it came to the prize they’d offer and the promotional efforts around it. They utilized social media, marketing each promotion (their major promotion month was September) and sharing photos of customers who’d received their cruise certificate as part of their vehicle purchases. 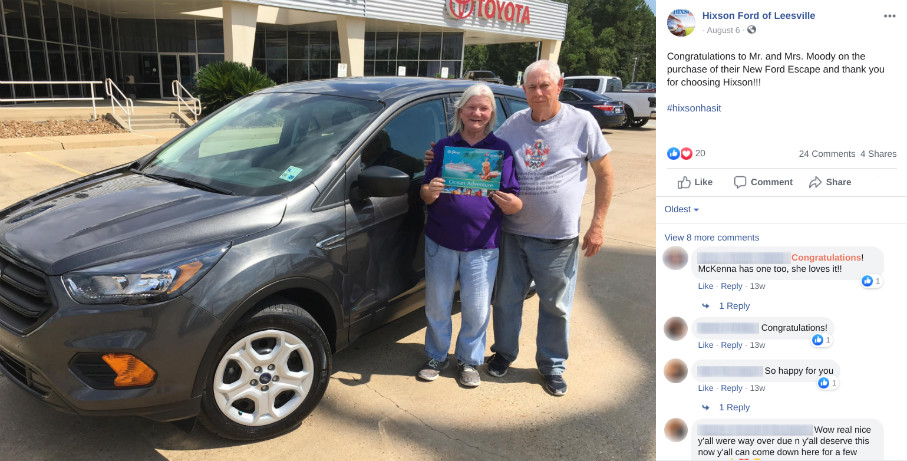 Those efforts paid off, with an uptick in vehicle sales and positive feedback from customers who received the cruise certificate. The dealership’s General Manager, Christos, got in touch with Odenza, noting he’d received calls and text messages of thanks from customers who’d gone on to redeem and enjoy the cruises.

A key reason for this success comes down to the investment Hixson Ford put in. They didn’t just purchase cruise incentives and then chuck them in a drawer to use later. The entire Hixson Ford family, from the GM to the marketing team and sales staff, got involved and coordinated together to get the most from the efforts.

They utilized our marketing materials, promoted their offers on social media and their website, decorated the dealerships with signage and other physical collateral, and all in-house staff were well-versed in the offer and what did and didn’t apply under the cruise certificates.

When a promotional effort is well coordinated across all departments, the likelihood of positive results is always far greater – and Hixson Ford is a shining example of this.

If you’re interested in finding out how experiential and travel incentives can heighten your business promotion ideas, we’d love to chat.

Be sure to contact us via the form at the bottom of this page or via our contact page to get started.