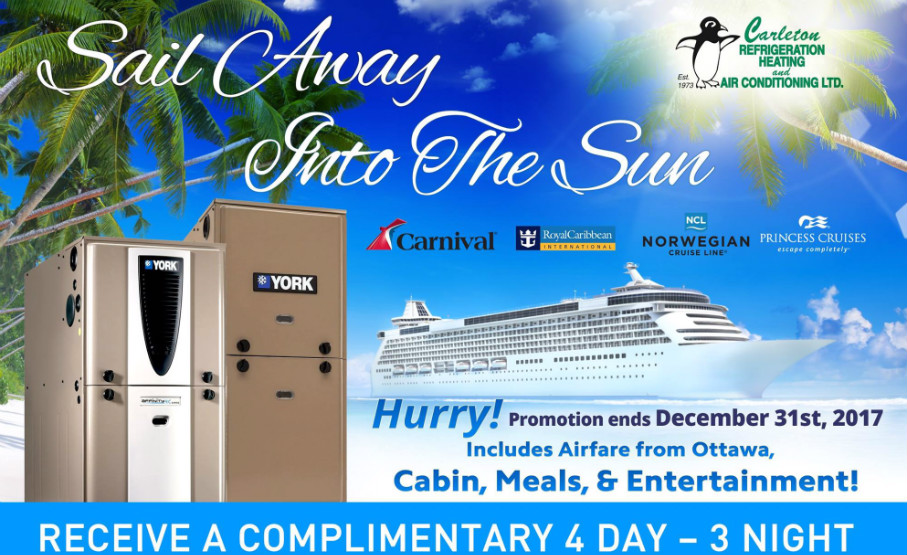 From November until March, Carleton Place in Ontario, Canada, experiences average lows that range from -3° to -15° celsius (26° to 5° fahrenheit). Needless to say, if a resident’s furnace happens to die on them during these months, then they’re going to need a new one ASAP. Even if a furnace isn’t running as efficiently as it used to, it can be enough reason to make an upgrade.

Local HVAC company Carleton Refrigeration Heating and Air Conditioning built a campaign around this, and initially ran it for the month of November. However, given the phenomenal response they received during that month, they chose to extend for one more month up until the end of December.

In this blog, I will be providing you with a closer look on Carleton Refrigeration’s campaign and how they utilized both Facebook and a cruise offer to incentivize more locals to do business with them.

• The campaign – the offer, requirements of eligibility, and the reward

The campaign, as mentioned above, initially started in November. For Carleton Refrigeration, their aim was to improve upon the number of York furnaces sales they made in November of the previous year. They did this by initially ordering 10 of our 4-day cruise incentive packages, which tied into a simple but highly effective offer.

In terms of promotion, they developed a strong online presence for it. Along with having a devoted promotion page on their website, they also got the word out about the promotion itself on social, with Facebook being their channel of choice. (I will be touching on this further in the next section.)

November proved to be successful, and Carleton Refrigeration decided to extend the promotion into the month of December, as well. As part of the extended promo, they ordered another five cruise incentives.

A large chunk of Carleton Refrigeration’s digital promotional efforts were run through Facebook. They achieved this through a primary mix of posts that detailed the promotion itself and posts that showed customers who had been recipients of the promotional cruise. The latter posts, those focused on the recipients, proved to be very effective. 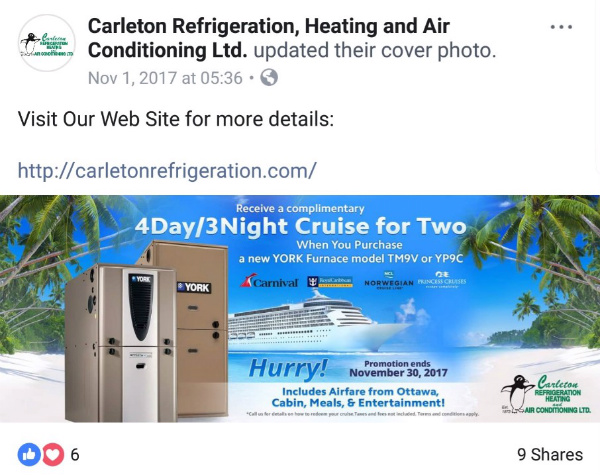 This was the initial post regarding the promotion that they posted, and as you can see it got a few shares and likes/reactions. The next day, however, they posted a more comprehensive breakdown of the promotion and what it involved, and the engagement was far greater. 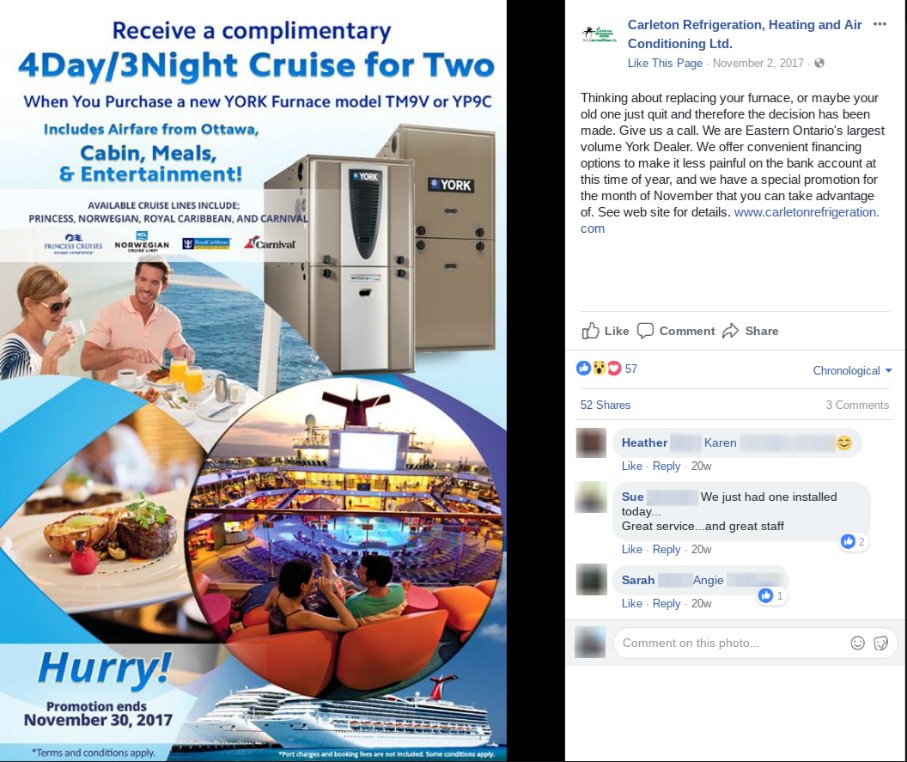 The difference in terms of sheer engagement is stark. With an image and accompanying text that gives greater context to what the promotion involves, the client’s second post about their offer received 57 reactions, 52 shares, and three comments – of which two other Facebook users were tagged, as well.

Carleton Refrigeration’s November-long promo was hitting the right people at the right time of the year; just as the cold, snowy months were really beginning to set in.

They followed this up with photos of customers who had been given one of the cruise certificates as part of the promotion. Suffice to say, these photos of fellow residents of Carleton Place and its surrounds were very well received by the client’s Facebook fans. 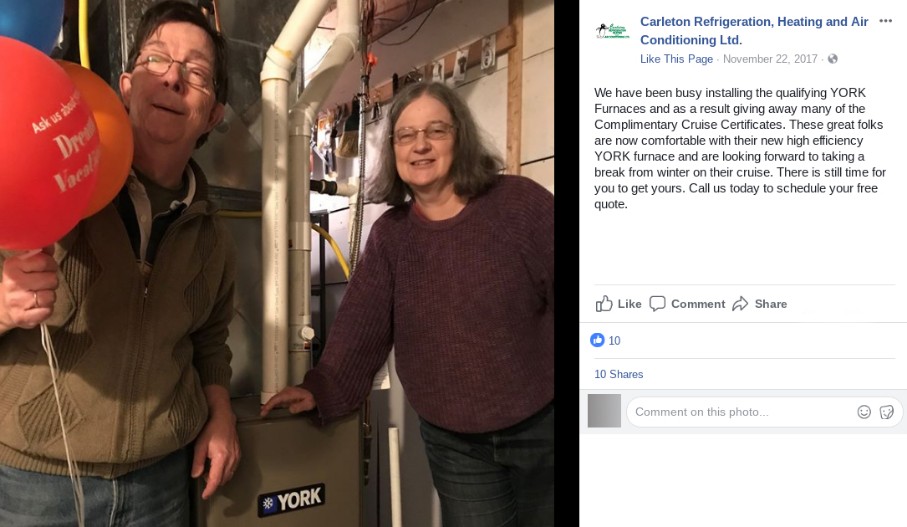 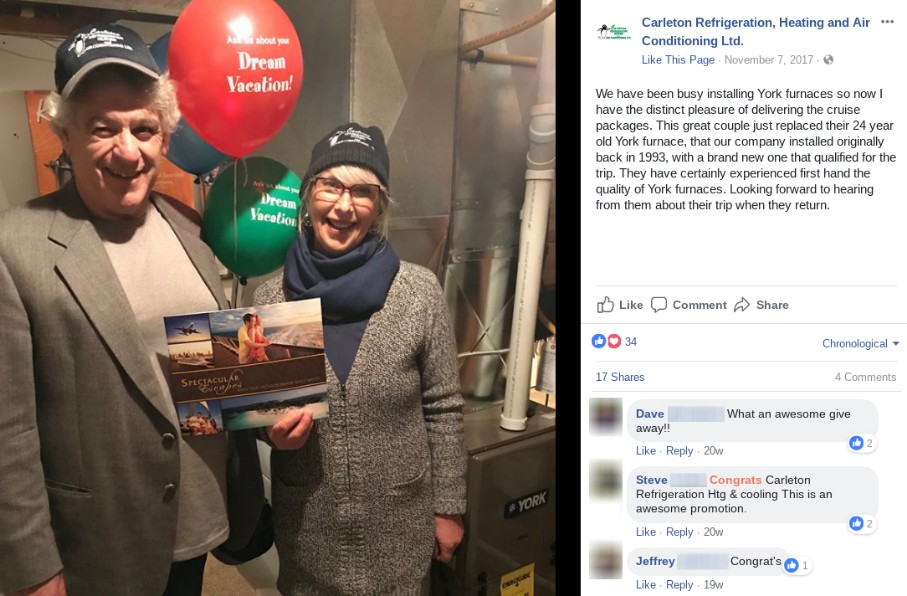 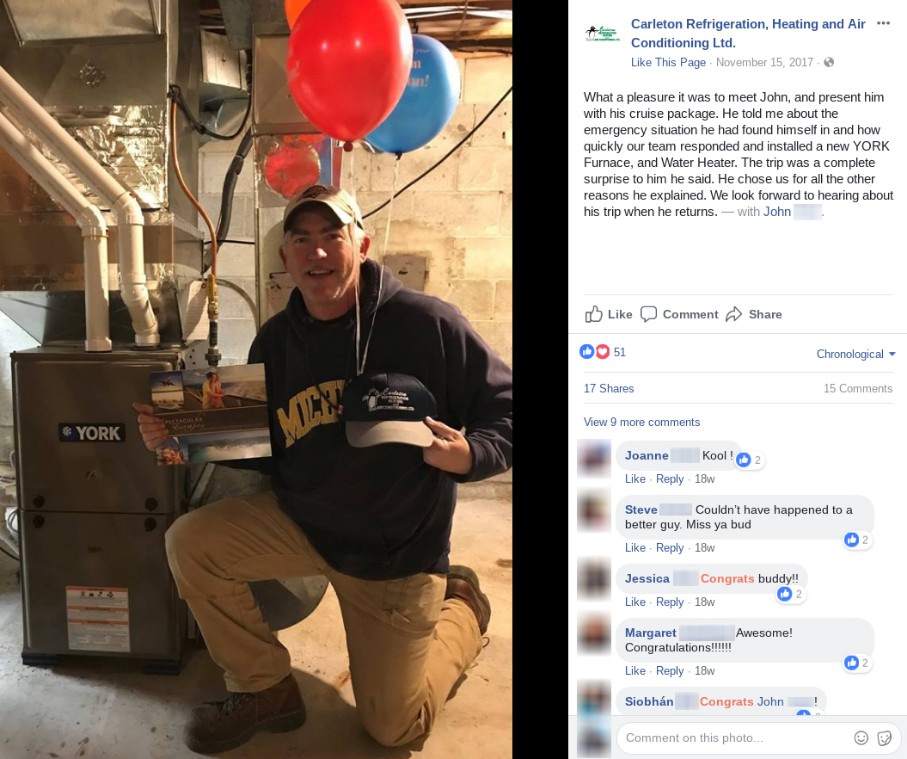 Collectively, these three posts drove 95 reactions, 44 shares, and 19 comments. Given how restrictive Facebook can be with brand posts, metrics such as these are fantastic.

On shares alone, Carleton Refrigeration would have had these posts effectively surfaced to thousands of relevant Facebook users throughout its local and surrounding communities – this would include the locals of Ontario’s capital city (and Canada’s overall capital), Ottawa.

Customer reviews, whether they’re showing on social, through Google search results, or on long-running review/directory sites such as Yelp, are very much like word-of-mouth marketing for the digital age. Most people research businesses online before they choose to go with them nowadays.

To show you how a combination of great service, products, and incentives can inspire a customer to spread the word about your business, let’s look at this review for Carleton Refrigeration; which was written by none other than one of their customers and cruise recipients, John (from the above photo).

He gives a five-star review and provides a massive piece-by-piece breakdown of why he was so happy with the service provided to him. (NOTE: if viewing this on mobile and you want to see the below image more clearly, open the image in a new tab so that you can zoom in on it). 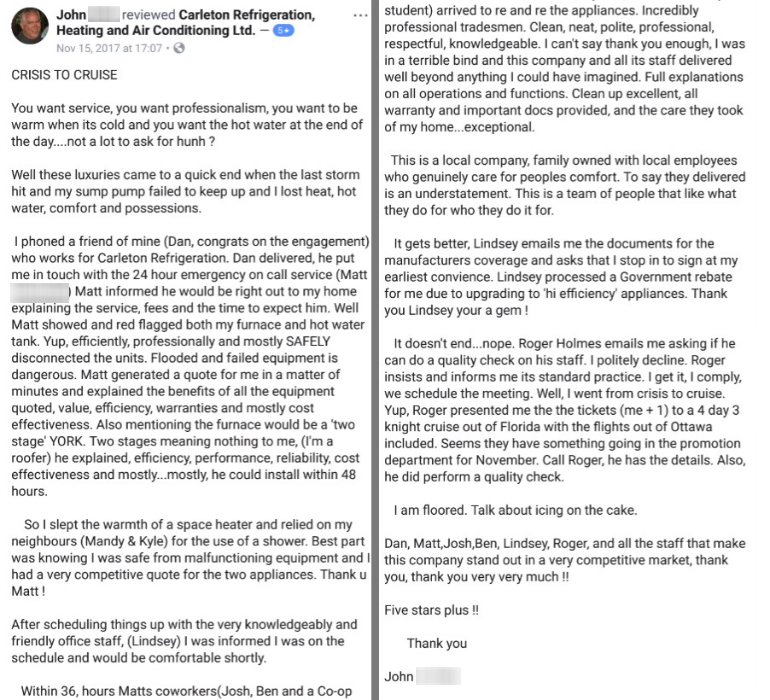 These are the kinds of Facebook reviews that can add so much authority to your business. Of course, this is not to undermine the fact that Carleton Refrigeration receive glowing reviews on a regular basis outside of promotional events, but the extra edge incentives provide can give customers all the more reason to tell everyone else why your business is worthy of attention and patronage.

In terms of results, Carleton Refrigeration easily achieved what they had initially set out to achieve, which came down to increasing their November sales of York furnaces over the same period of the previous year. Given the fantastic results of the initial promotion, they then extended it by another month throughout December, which saw continued success.

There are plenty of reasons why Carleton Refrigeration was able to use all of their cruise certificates and close more sales during the start of the colder season for Ontario, and a large number of the reasons have to do with the excellent execution on their behalf. These included:

• They tied the cruise certificates to a promotion that was both highly appealing and very well-promoted;

• They didn’t require customers to undertake too many steps to be eligible (the more steps to a reward, the less motivated people will be);

• They regularly posted about the promotion during its November to December run, which kept interest and awareness of it consistent during those cold months;

• They shared candid photos of customers, as well as posts that helped contextualize the value of the promotion, on Facebook; and

• The travel incentive they opted for was one they knew would appeal to their customers: a sunny cruise is undoubtedly enticing when your front yard is covered by two feet of snow

If you’re interested in learning about how travel incentives could be used to help your HVAC business secure more contracts and drive sales, reach out to us. You can call us on 1-866-883-2968 or simply fill out the form below and tell us what you’d like more information about.