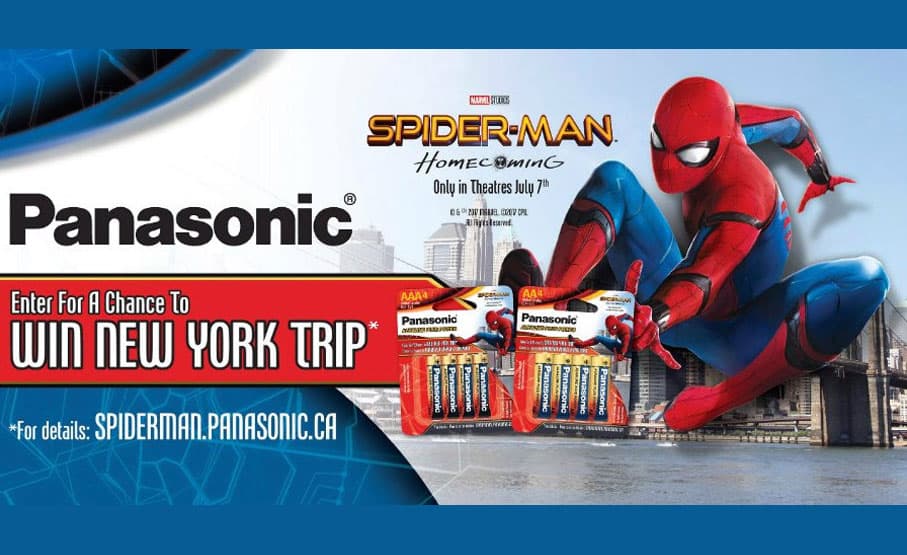 Don’t have time to read the full piece? No problem, here’s a quick breakdown of it for you. For greater context, you can read the full story below.

• Odenza partnered with Panasonic Canada for a contest that they ran in sponsorship of blockbuster Marvel film Spider-Man: Homecoming

• Panasonic Canada’s aim was to:

◦ Increase awareness of their battery products, including the Alkaline Plus and Platinum Power range
◦ Drive more traffic to panasonic.ca
◦ Increase their social media presence, as well as overall impressions, followers, and engagement

◦ Contest ran for 12 weeks, allowing Panasonic Canada to keep their battery products front-of-mind throughout the summer/fall period
◦ Contest was complemented by digital and in-store branding and signage regarding the contest – specific branding linked to the contest were included on Panasonic’s battery products
◦ Bi-weekly prizes (one every two weeks) maintained interest from prospective customers in Canada, and led to regular contest entries and thousands of votes, which helped substantially increase traffic numbers to panasonic.ca (more information provided in the full story)
◦ On September 6, the 6 winners of the grand prizes were announced publicly on social media; the efforts drove significant engagement online, helping to boost Panasonic Canada’s online brand presence across social and the website

Spider-Man is one of the most beloved comic book superheroes ever committed to print, and last year Marvel Studios released Spider-Man: Homecoming. Suffice to say, there was a lot of buzz surrounding the film’s release; both among Spider-Man devotees and anyone wanting to enjoy a summer blockbuster. For the companies that were official sponsors of the film, it was an imperative time to market themselves and leverage that excitement.

One company was Panasonic, and the Canadian division approached Odenza to help them run a competition that would address the following key objectives:

• Increase awareness and sales of the Panasonic battery products
• Grow their social media presence
• Increase the number of visits to both spiderman.panasonic.ca (the domain for contest entries) and the main panasonic.ca website

Running for 12 weeks across the summer, Panasonic knew they had to offer a grand prize that people would really want. To achieve this, they employed our help and we provided them with 6 travel certificates that would give each respective winner a trip for two to New York City.

These 6 grand prizes were drawn at random and given to anyone who participated in the Spider-Man Power Pose contest (I’ll be discussing this in the very next section). The winners of the grand prize draw were publicly announced on September 6, 2017. Below you can see the six winners and the poses they had submitted.

When you’re running a contest that plays out over a near 3-month period, the challenge comes in maintaining interest. If you were to run a 3-month contest that only had a prize revealed right at the very end of that stretch, participants could lose interest and even forget about the contest until official word of the grand prize winners were revealed. The key, then, is in giving participants a reason to return to the contest again and again.

Panasonic Canada achieved this by ensuring there was more required than just an entrants’ name and number – this was no set and forget affair. Instead, they ran a Spider-Man Power Pose contest. This required each entrant to submit a photo of themselves pulling off their best Spider-Man pose – if the entrant happened to own a Spider-Man suit, that was always a plus.

While grand prize winners were drawn at random, the contest also included bi-weekly prizes for whoever’s Spider-Man pose got the most public votes on spiderman.panasonic.ca (note: this domain is no longer active). After the 2-week public voting period ended, the voting count was reset to zero and the process would begin again. The winners of the bi-weekly prizes received a Spider-Man swag bag, and there were 6 bi-weekly prizes in total.

By including these additional prize giveaways that required active engagement among the public, Panasonic perfectly accounted for the 3-month gap between the announcement of the grand prizes and the eventual reveal of the 6 grand prize winners. 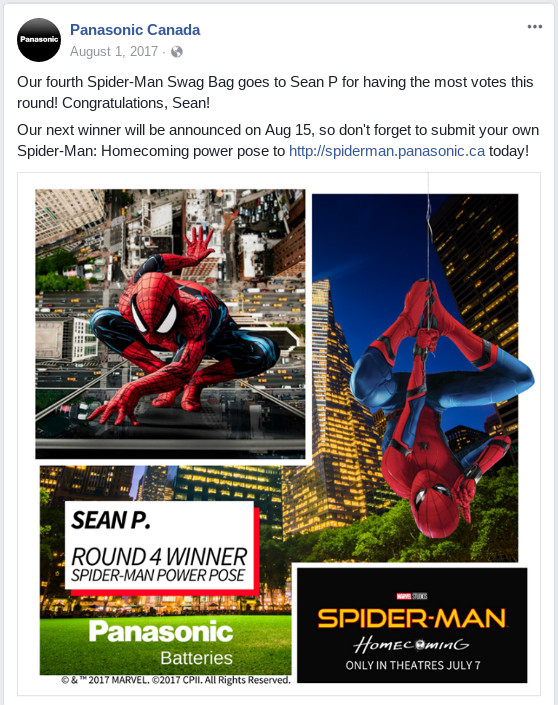 Following on the from the above, by integrating bi-weekly prizes and encouraging users to vote for their favorite poses throughout the duration of the contest, Panasonic stayed front-of-mind. Given votes had to be made through a panasonic.ca domain, it also brought in more traffic to the site and increased awareness of the battery products.

Along with the extensive digital efforts across social media and their website, Panasonic also invested in in-store branding and signage across stores such as Dollarama. As you can see from the below photos from inside a Dollarama, all branding and mentions of Spider-Man were tied to Panasonic batteries. 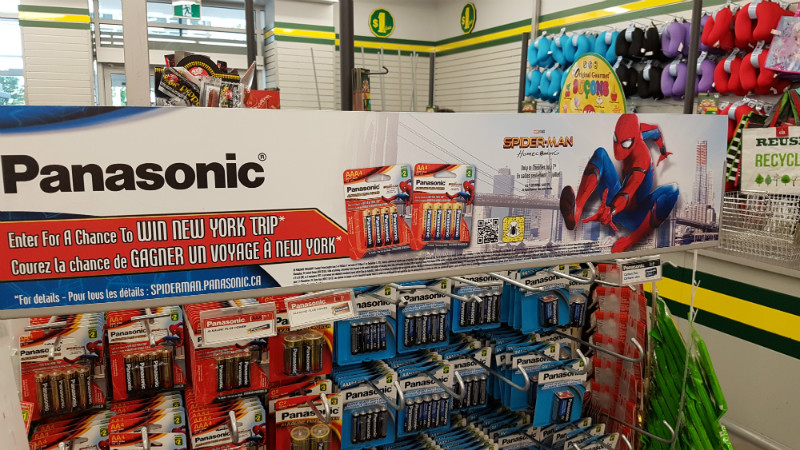 While general customers may not think much of it at the time, consistent branding is essential as it builds a subconscious association. Panasonic was a sponsor of Spider-Man: Homecoming, they wanted Spider-Man fans to enter the contest, and the excitement of the contest helped foster a continued relationship between Panasonic’s batteries and Spider-Man. 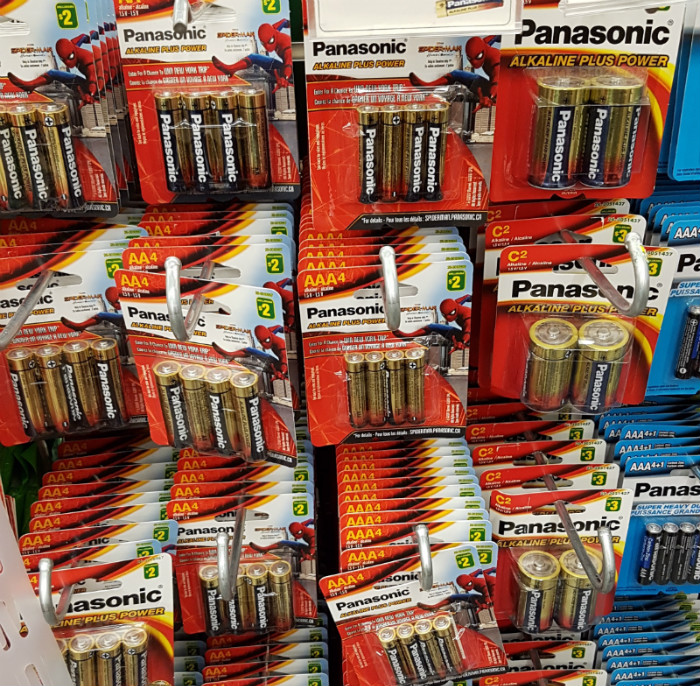 Panasonic’s marketing and contest efforts that coincided with Spider-Man: Homecoming were a resounding success. At the end of the campaign, they had a large number of contest entrants, thousands of public votes for the bi-weekly winners, and were able to announce 6 lucky grand prize winners who could take advantage of the travel certificates to NYC that we provided. They knew that for a long-term contest to flourish, it would require long-term investment both on the digital and traditional fronts.

A devoted domain made it easy for Panasonic to keep track of visitor and engagement numbers, social media allowed them to boost the message, and their in-store displays in Canada-wide outlets such as Dollarama helped them reach more and more of their ideal customers: the average Canadian, Spidey lover or otherwise, who wanted the chance to fly away and visit one of the greatest cities in the world.

On our end, we were proud to make Panasonic’s grand prize offerings possible. If you want to learn more about how we can help you elevate your contest and campaign efforts, no matter the size of your business, reach out to us today by calling 1-866-883-2968 or filling out the form below.