Air Travel’s 2022 Challenges and How Things are Getting Better 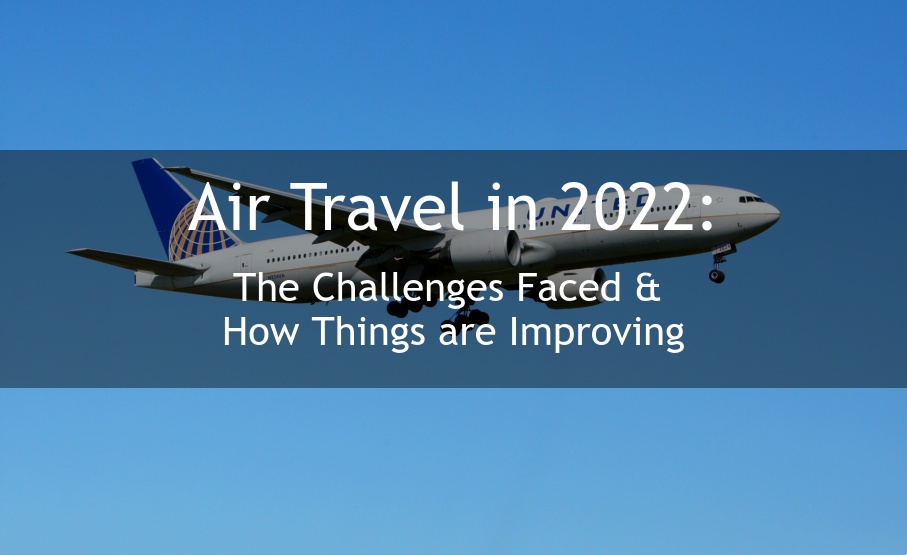 As the world opened back up over the past year, the number of people returning to travel increased with it. This increase in eager travelers, contrasted by limited airline staff, led to a host of canceled flights and significant delays for many of the flights that went ahead.

But while the 2022 summer had its fair share of chaos, there are signs that the tides are turning and flying both nationally and internationally will ease moving forward.

During the first three quarters of 2022, the number of Americans who flew rivaled pre-pandemic numbers from 2019. In a report by CNBC, the Labor Day weekend was the first holiday since the COVID pandemic to outpace 2019 numbers. In total, the Transportation Security Administration (TSA) screened 8.76 million people over the weekend.

While cancellations were statistically not too excessive compared to 2019 numbers, it was delays that truly impacted most travelers.

As collated by CNBC (and sourced from FlightAware), US airlines faced delays with more than 20% of their flights across several months. These delays varied from short periods of 30 minutes to multi-hour delays that impacted travelers’ abilities to reach connecting flights. 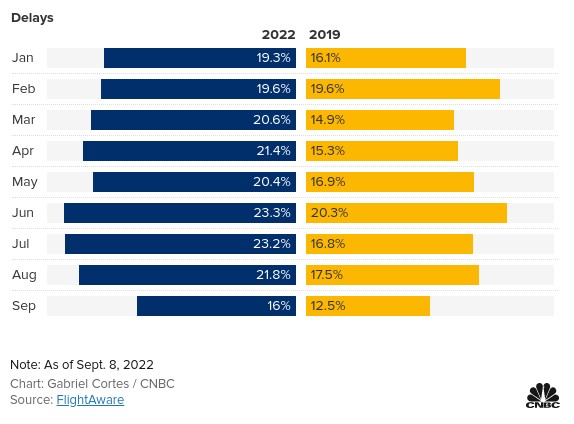 Not all airports were impacted equally. On the low-end of the scale, Portland International saw 16% of its flights delayed. On the high-end, Chicago Midway International faced a far more significant 37.7% in flight delays. 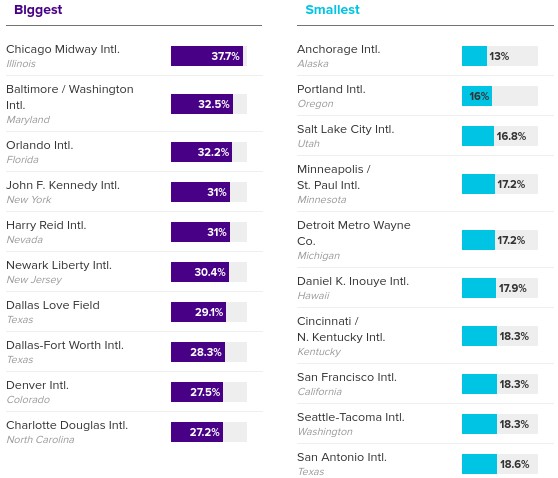 As a result of the multiple delays and cancellations, complaints from travelers to the US Department of Transport soared, as evident below.

While much of the above may paint a somewhat grim picture of travel throughout 2022, it’s also important to remember how unprecedented the impact of COVID-19 was to the industry. As noted by Airlines for America, air travel plummeted to numbers that hadn’t been seen since the 1950s “dawn of the jet age.”

The significant drop in demand made it difficult for airlines to maintain their staffing numbers. Along with having to let large numbers of staff go, there were also pilots who decided to simply opt for early retirement. This created a noticeable deficit in the number of airline staff across the country.

Then, when air travel rebounded, it shot from 1950s numbers to 2019 numbers within a matter of months – a much faster turnaround than most industry analysts had forecasted.

Most industries across the world are still working hard to get back to the same productivity levels as they were pre-pandemic; for the airline industry, the reality of their struggles is more apparent because of the immediate associated demand.

Consider a customer who’s waiting on a graphics card for their computer that’s been in inventory limbo for the past 18 months. Chances are they’re willing to accept the inventory delays on that front; but if that same customer wants to go on a flight to see family, they expect to be able to catch a flight now.

That’s not to say that customers aren’t justified in their frustration when delays or cancellations occur; but it doesn’t stop the reality the airline industry is trying to recover in a similar manner to many other industries across the globe.

The good news is that things are getting better.

Things Will Get Better

Perhaps one of the key missteps airlines made in the past year was biting off far more than they could chew. Their flight schedules were packed to similar numbers from 2019, but they didn’t have the staff or consistency to cater to such high benchmarks.

By the end of summer, they revised their schedules and reduced the number of flights they offered, making it easier for them to account for lower staff numbers and employees sick with COVID.

They also put in better systems of compensation for passengers who suffered any delays or flight cancellations, easing the understandable frustration many were feeling.

As reported in The Washington Post, nine of the US’s 10 biggest airlines pledged to rebook passengers at no cost on different flights within their respective airlines, and five of them would also offer the option of rebooking passengers on other airlines’ flights at no cost.

Importantly, airlines are making huge strides in rebuilding staff – particularly getting more pilots. The slowdown of travel during the Fall provides airlines more time to further replenish staff numbers and map out what flights they’ll be able to provide.

Staffing issues at airports (e.g. less TSA agents) also contributed to longer security lineups and slower processing times, which affected passengers. But many airports have now bolstered these numbers and implemented more efficient processes to get people through security and to their departure gates on time.

So while 2022 has been a challenge for airlines, airports, and passengers, air travel is sure to get better and smoother over the coming months.