How to Run a Brilliant Travel Contest 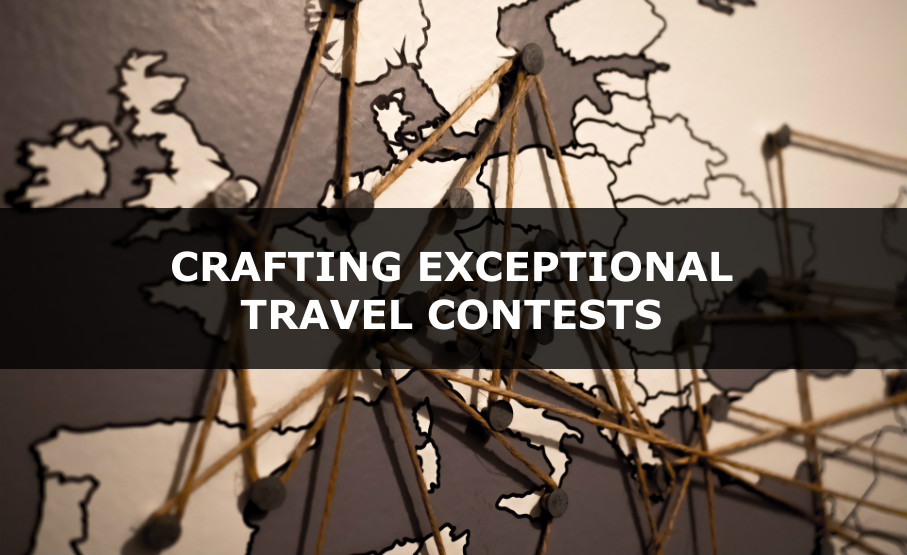 Travel is such an effective contest prize. Whether it’s a cruise, a theme park visit, a trip to Vegas or a relaxing 7-day resort stay, everyone loves to have a little R and R.

Throughout this article, I’ll be providing you with fundamental tips and advice on coming up with engaging travel contest ideas and how you can run your contests effectively.

If any contest is to work, you need to determine the appeal of the prize. This appeal can be broken down into various pieces, but what matters most are the following two questions:

1. Does it possess a universal appeal among your audience?

2. What is the perceived value?

Universal appeal is important, so unless your business already specializes in a very niche field that attracts a specific audience, then you’ll probably want to go with a prize that almost anyone would appreciate.

Travel-themed prizes possess consistent relevance for most people. It doesn’t matter if your customer is still saving for a trip or they have all the money in the world to go on one, a vacation is a chance to get away, experience new things, and feel like a true explorer. It’s an appealing pull that is felt by almost everyone.

Even if someone hates flying or would get sea sick on a cruise, there are plenty of local vacation options, as well as opportunities to see other parts of their country – or those of bordering countries.

What do people love about the grand prizes offered during a contest? Well, along with the actual prizes, the perceived value they have is important. Needless to say, if a customer scores a cruise worth thousands of dollars as a contest prize, they’ll be stoked.

Whether or not you choose to explicitly state what a travel prize’s dollar value is up to you. For the most part, however, travel prizes tend to hold a high perceived value in most consumers’ minds.

Let’s cut to the chase. Contests should be simple or fun; ideally, they should be both. In the end, a contest is your way of getting your company in front of more people – which includes both current customers/clients and prospects.

If part of your objective with the contest is to have more people come into your actual store, then you can organize it so they must enter while in-store. The one caveat with this approach is that it will reduce the reach of your contest unless your store is located in a high-traffic area.

This approach can be good if you’re a smaller, local business. After all, there isn’t much need for you to advertise your contest to people in other states, let alone two towns over. And if all the contest requires is for them to fill out a form in-store, then you’re still keeping the whole thing simple.

When you’re a bigger business with more locations throughout a city, state, or multiple states/provinces, then offering more ways for consumers to enter a contest is going to be a logical step. Again, you want the ways of entering to be simple, even if the contest steps are a little more involved.

Entry forms can be made available online via your website, through email, and on social media. If your contest is less about a form and more about social actions (e.g. like this video, comment, tag a friend, etc.) then you’ll need to ensure you can track each entry efficiently and fairly.

If your plan is to run a more involved contest, one that goes beyond a simple listing of contact information or tagging a friend in the comments of social posts, then it is imperative to make sure the involved steps are actually enjoyable.

You may run a contest that is a classic “In 25 words or less” or one that encourages contestants to include a photo from the best vacation they’ve been on thus far.

Video contests can be effective, and the same can be said of Instagram contests that require a photo and a caption that utilizes a set hashtag and tag of your company profile. Even though these specific contests require more of the entrant, they’re still easy (and enjoyable) to fulfill.

An Example of Contests Aimed at Current Customers

If one of your travel prize ideas is to reward and maintain loyal customers, then you can look to the approaches used by companies such as Microsoft.

For anyone who has a Microsoft account, they can accumulate what are known as Reward Points any time they purchase a product from Microsoft’s online store (including Xbox game purchases), as well as when they perform Bing searches on mobile and desktop or view news stories linked on Bing’s main page.

Over time, these points can be redeemed to earn online store credit, donate to charities, or to even enter contests such as Microsoft’s Flip and Win.

Now, obviously not every business has the resources to run such a comprehensive points-based reward and contest system like Microsoft, but it does shine a light on how contests can help businesses keep people engaged and actively using their products and/or services.

For example, if you have loyalty cards that note the amount of money customers have spent at your store over time, you could implement a system whereby once they have spent $1,000 you inform they’re eligible to enter a contest comprising three prizes: a gift certificate at your store, event tickets for two, or a trip to Vegas.

As I have reiterated throughout this article, simplicity and fun are key to a good contest – no matter the prize.

Given that travel prizes already offer plenty of appeal in and of themselves, what matters is executing a contest that is going to make people want to get involved. Take the following into consideration when crafting your contest:

• Elaborate is fine, arduous is not: it’s perfectly fine to run a contest that may be a bit more involved than filling out a form or commenting on a social post, but make sure all of the steps involved remain simple – people don’t want to endure a contest.

• Your prize needs to be deserving of the steps required: a contest prize worth $20,000 can require extra effort from entrants, but don’t assume people will be willing to put in the same kind of effort for a prize only worth $1,000.

• Don’t be a snoop: when filling out a form, people don’t want to be providing an excess of personal information – you don’t need to know their home address, nor every single phone number imaginable for you to reach them on. The more you snoop, the less willing they will be to enter.

• Use the right voice: again, have fun – it’s a contest, so you want to express the event in a way that will get people excited and invested in it. Also, be mindful of your demographic – are they young, elderly, married, single, young family? What can you say that will get them involved?

• Promote it: it doesn’t matter how good a contest or how great its prize on offer is, you need to promote it. Promote it on social; via email; in-store; by investing in some search engine advertising; and, if you have the money to do so, through traditional channels such as print, radio, and TV. But, as always, determine a budget and stick to it – never go beyond it.

• Employ the services of a reputable travel prize agency: working with a travel incentive agency will help simplify the process of your contest efforts, but make sure that you engage with the right agency. Odenza is an award-winning travel incentives agency that has been in business for 20 years and is BBB accredited with an A+ rating.

Have you run travel-themed contests in the past? How do you feel they stacked up against other contests you’ve tried? Be sure to share your experiences in the comments below.

If you want to learn more about travel incentives and how they can be used in contests, you can reach out to us by calling 1-866-883-2968 or by simply filling out the form at the bottom of this page.